Before the start of summer, most areas of the country have the rainy season called tsuyu, and during this season we see two things which are especially beautiful: one is iris and the other is the bride going get married by boat. In the town of Itako located about 60 miles north-east of Tokyo, “Itako Ayame Festival” takes place every year in June. This is the local festival of iris and more than one million irises are in bloom during this time of year. There is an iris garden where you can watch the traditional event called “Yomeiri-bune” which has been transmitted from generation to generation. Yomeiri means ‘get married’ and bune (or fune) means ‘boat’. The town of Itako has been developed for centuries as a focal point of water transportation, used not only to transport goods but also to travel by boat in everyday life. In addition, it was customary for the bride at the wedding to go to her groom’s house by small boat. The town revives this tradition every year only during the season of iris. The bride is very beautiful, walking slowly and elegantly, and everybody celebrate her both in the midst of the iris garden and along the river bank. This event “Yomeiri-bune” specially created for the traditional Japanese wedding takes place on weekends and Wednesdays (except 29th) in the month of June. https://english.ibarakiguide.jp/news/suigu-itako-ayame-festival.html 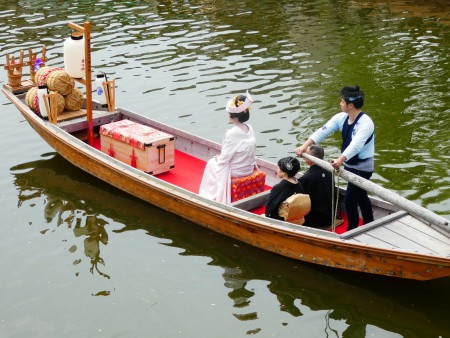